This information is the responsibility of the Regional Government of the Azores and aims to inform you of the measures that are in force in the Autonomous Region of the Azores, in the context of combating the Covid-19 pandemic , directed specifically to passengers who disembark at airports in the Azores on flights from areas considered by the World Health Organization to be areas of active community transmission of SARS CoV 2 or that have chains of active transmission of this virus.

For more information you can consult:

Why is there a need to determine specific measures for passengers disembarking in the Azores?

Firstly, to protect your health, the health of all those you can contact while in the Azores, including your family, and the health of all Azoreans. Do not forget that the SARS CoV 2 virus is highly contagious and can ultimately cause death. It may happen that a person is infected and not know it. This is because, according to current scientific knowledge, about 25% to 30% of the infected are asymptomatic. That is, they have no symptoms, such as fever, cough or difficulty breathing. In such cases, being infected and being asymptomatic, you may be contaminating other people without being aware of it. On the other hand, even in the case of people who, being infected, end up revealing symptoms, the period in which they can start passing the virus on to others with whom they contact, precedes, by some days, the manifestation of symptoms. Finally, the mainland of Portugal is considered by the World Health Organization, as of active community transmission zone. This means that the SARS CoV 2 virus circulates in the community without being able to determine the focus of infection. In the Azores, the transmission chains of the virus have so far been identified and circumscribed. Thus, also to prevent the public health situation in the Region from worsening, several measures have been determined by the Regional Government for passengers disembarking at the airports of Ponta Delgada, on the island of São Miguel, or Lajes, on the island of Terceira

What are these measures and what do I have to do?
How to proceed in case I want to travel to another island?

In case I intend to travel to another island, I communicate this intention by filling in the health form provided according to the draft attached to Normative Circular no. 37, of May 28, 2020, from the Regional Directorate of Health, committing myself to comply with the following procedures: If I perform a screening test on arrival in the Region, I can, from the moment I become aware of the NEGATIVE result, travel to another island in the Region. If I present a NEGATIVE test on arrival, I can immediately travel to the other island. Whether in one situation or another, I am obliged to contact the local health authority where I live or are staying, on the 5th and 13th days, counted after the initial test, to perform a new SARS-CoV-2 screening test.

Necessary information concerning the hotel units determined for this purpose and the associated services and conditions, will be available through the COVID-19 Line for non-medical issues – 800 29 29 29 or by email esclarecimentocovid19@azores.gov.pt. 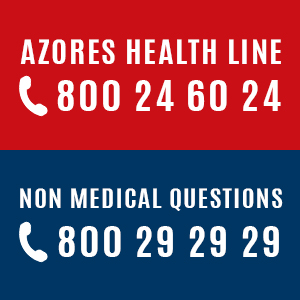 Traveling to the Azores - Procedures to be followed