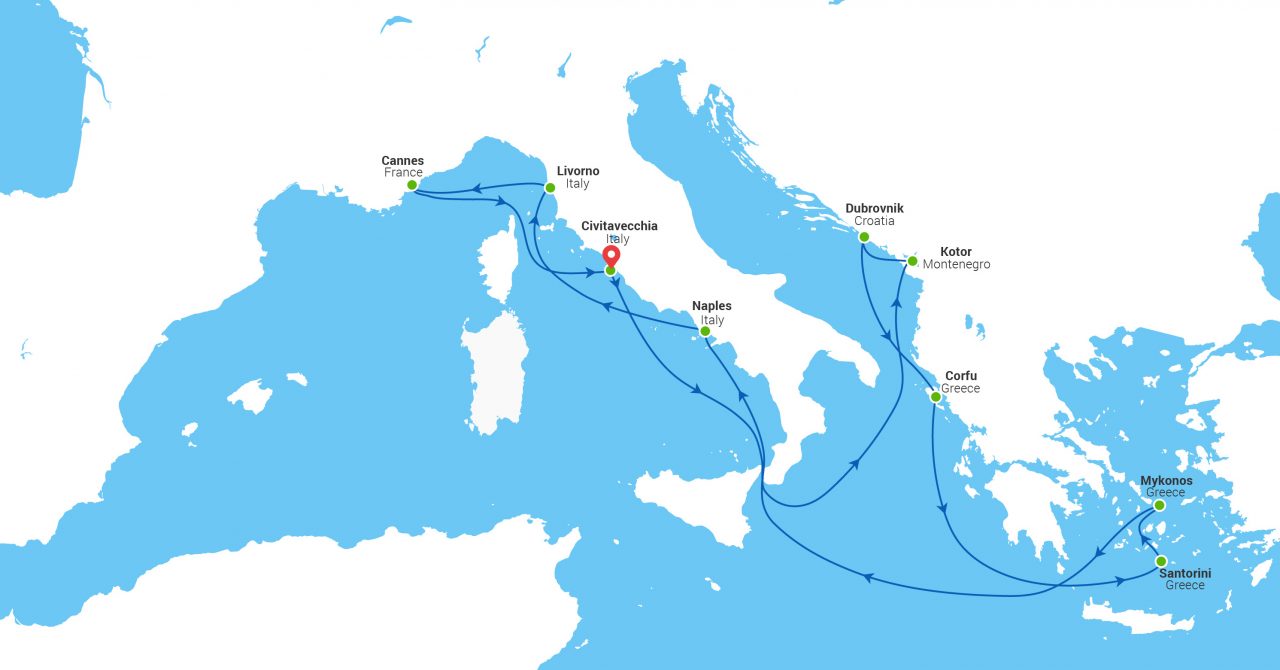 Enjoy this day at sea as you travel to your next port of call. This is an opportunity to swim, catch some

sun on deck or take advantage of the many activities that are onboard your ship. Eat heartily, take a

nap and get ready for the next port of call! This is what makes cruising so great.

Enjoy this day at sea as you travel to your next port of call. This is an opportunity to swim, catch some

sun on deck or take advantage of the many activities that are onboard your ship. Eat heartily, take a

nap and get ready for the next port of call! This is what makes cruising so great.

Cannes is a city located on the French Riviera. It is a commune located in the Alpes-Maritimes department, and host city of the annual Cannes Film Festival, Midem, and Cannes Lions International Festival of Creativity. The city is known for its association with the rich and famous, its luxury hotels and restaurants, and for several conferences.

Civitavecchia (meaning "ancient town") is a city and comune of the Metropolitan City of Rome in the central Italian region of Lazio. A seaport on the Tyrrhenian Sea, it is located 60 kilometers (37 miles) west-north-west of the center of Rome. The harbor is formed by two piers and a breakwater, on which stands a lighthouse.

Corfu or Kerkyra is a Greek island in the Ionian Sea. It is the second-largest of the Ionian Islands, and, including its small satellite islands, forms the margin of the northwestern frontier of Greece. The island is part of the Corfu regional unit and is administered as a single municipality, which also includes the smaller islands of Ereikoussa, Mathraki and Othonoi.

Dubrovnik (historically Latin: Ragusa) is a city on the Adriatic Sea in southern Croatia. It is one of the most prominent tourist destinations in the Mediterranean Sea, a seaport and the center of Dubrovnik-Neretva County.

Kotor is a coastal town in Montenegro. It is located in a secluded part of the Gulf of Kotor. The old Mediterranean port of Kotor is surrounded by fortifications built during the Venetian period. It is located on the Bay of Kotor, one of the most indented parts of the Adriatic Sea. Some have called it the southern-most fjord in Europe, but it is a ria, a submerged river canyon. Together with the nearly overhanging limestone cliffs of Orjen and Lovćen, Kotor and its surrounding area form an impressive landscape.

Livorno is a port city on the Ligurian Sea on the western coast of Tuscany, Italy.It has traditionally been known in English as Leghorn.

Mykonos is a Greek island, part of the Cyclades, lying between Tinos, Syros, Paros and Naxos. The island spans an area of 85.5 square kilometers (33.0 sq mi) and rises to an elevation of 341 meters (1,119 feet) at its highest point. Mykonos's nickname is "The Island of the Winds". Tourism is a major industry and Mykonos is well known for its vibrant nightlife and for being a gay-friendly destination with many establishments catering for the LGBT community.

Santorini, officially Thira and classic Greek Thera, is an island in the southern Aegean Sea, about 200 km (120 mi) southeast of Greece's mainland. It is the largest island of a small, circular archipelago, which bears the same name and is the remnant of a volcanic caldera. The municipality of Santorini includes the inhabited islands of Santorini and Therasia and the uninhabited islands of Nea Kameni, Palaia Kameni, Aspronisi, and Christiana.

There are no comments yet.

Tailored Trips
Packages
5 out of 5
8 Reviews

Subscribe to our newsletter and get exclusive first minute offers straight into your inbox.

Duration
11 days
Destination
More than 1
Travellers
2
Enquiry about the Package
Call Now Button
We use cookies to ensure that we give you the best experience on our website. If you continue to use this site we will assume that you are happy with it.Ok